Further Into The Dark – The Remixes 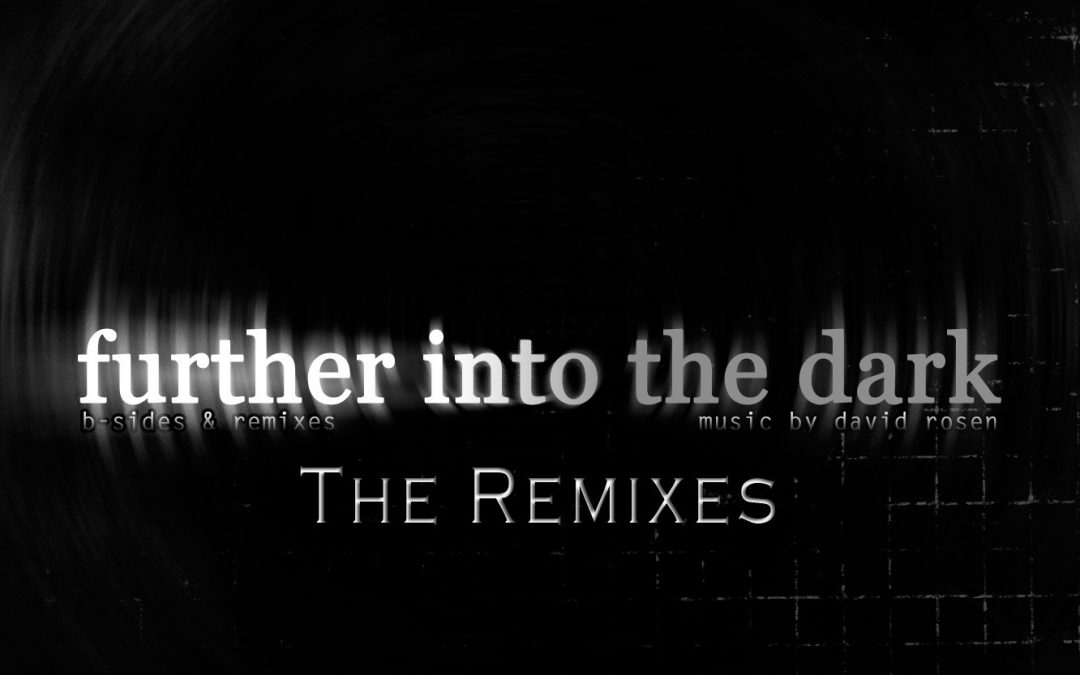 Last week, I posted a blog post about the 8 bonus tracks that make up the bulk of Further Into The Dark, the collection of B-Sides & Remixes taken from the sessions that led to my debut album, Echoes In The Dark. If you don’t have this bonus album, you can get it by supporting my Fundraiser, or buying the CD version of Echoes In The Dark at Bandcamp. This week, I’m going to talk a little about the 4 remix tracks on this album.

1) Broken Circuits (Bent & Glitched Remix) by Elemental Spark – I sent out tracks to 8 musician friends of mine and in the long run got back a total of 4 finished remixes. This was the first one. It’s also the first time I ever heard one of my pieces of music remixed by another musician, and it’s such an interesting and cool experience. This one uses elements of the original song as sort of a backbone and then composes new music all around it. It came out really cool, and the synth lead is awesome. He’s also using this track in an upcoming video game that he’s designing, so it’ll have a life outside of this album, which is always great for a composer like me. You can find out more about Elemental Spark and his other projects at his website.

2) Bandwidth (Black Camarican Remix) by Brian Garth – Black Camaro is one of my favorite bands in Las Vegas, and I was really happy that Brian Garth was down to do a remix for this project. He replayed some of the parts on real instruments, rearranged things, and added some new elements. It’s a killer remix and I hope he’ll be down to do another one for the next album. You can find out more about Brian Garth and Black Camaro at their Bandcamp profile.

3) 1000 Years (Feral Remix) by Shawn Lee Farrell – Shawn is a fellow Sonar user (the software I use to compose music) that I met online and a great composer. His remix is the most “traditional” of the four. It’s kind of what my mind expected when I imagined someone remixing one of my songs, and it’s really awesome. He totally nailed it, taking my original song and changing it in a way that gives the whole thing a different feel. I’d almost say he turned it into a “dream-like” version. You can find more about Shawn Lee Farrell at his website.

4) Broken Circuits (FUBAR Nation Remix) by MC Randumb – Any of you who know me personally know MC Randumb. We’ve put out a lot of funny, silly, ridiculous rap music (the kind of stuff I don’t normally talk about on this website) as MC Randumb & Jewish Dave. So it only made sense that I asked him if he wanted to try doing a remix, since he is a musician too. He did an awesome job of taking “Broken Circuits” and making it sound even dirtier and grungier than the original. The added synths and snares and hi-hats, as well as the way he pulls some of my original layers out at parts really transformed the song in a really cool way. He did an awesome job. You can find more about MC Randumb and his music at his Reverbnation Profile.

So that’s it. Between this and the first part of this 2 part blog post, that covers my thoughts and reasons behind the tracks on Further Into The Dark. I hope you enjoyed listening and reading. Now I’ve got a bunch of film projects lined up, as well as promoting the “If Only Tonight I Could Sleep” video release. I’m already working on a full 2nd album, but it will be a while before that comes out. In the meantime, I hope you keep listening. Thanks for reading.

Also, if you don’t have Further Into The Dark album yet, and haven’t checked out the fundraiser… Now is the time! Just a little over 2 weeks left until I pull the plug on it! A lot of really talented people worked on the “If Only Tonight I Could Sleep” music video and it’s got a great message and it’s just absolutely beautiful and I want to share it with as many people as possible. The fundraiser has gone great so far, but there are some things (like this bonus album) that you’ll never be able to get again. Plus you can get your own personal song, which I mean, if an artist I liked offered that, I’d jump on it! So check out the fundraiser page and consider supporting. You can even do the free option which includes leaving an album review and sharing the fundraiser which gets you the album without having to donate any cash. The full details are at the fundraiser page, so go check it out!