Further Into The Dark – The B-Sides 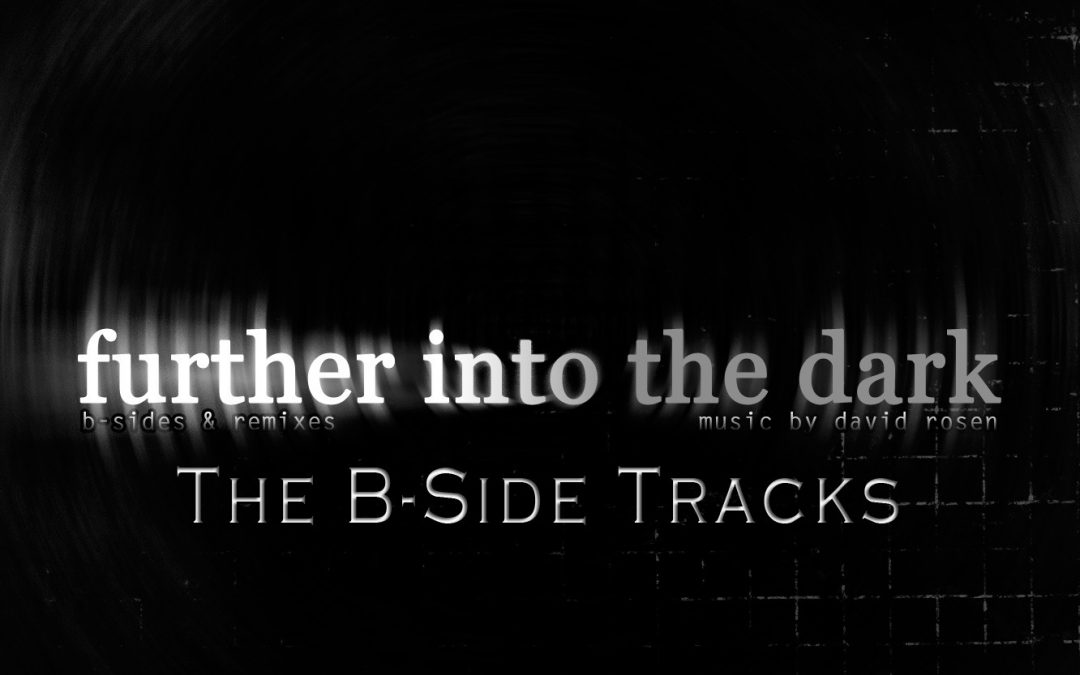 By now, a whole bunch of you have gotten a chance to check out Further Into The Dark, the bonus album of B-Sides & Remixes from the Echoes In The Dark sessions. If you haven’t, just go support my fundraiser, or buy the CD version of my album from Bandcamp to get a free copy. These next two blog posts are going to be a somewhat stream of conscience breakdown of the tracks on this release, and why I left them off of the main album.

Up first, the B-Sides.

1) “Escape” – I love this track. I think it’s one of the most exciting and fun pieces I’ve ever written. Plain and simple, the only reason I left it off of Echoes In The Dark is because I felt like it had probably been heard already by anyone who had ever checked out my website or Reverbnation profile. It was the first track on my profile for a long, long time. As it is, the album is almost half and half between tracks that, although updated, had been in some form on my site in the past, and new never-before-heard music… Including “Escape” would have pushed it over into more tracks that people might have already heard before.

2) “Neon Halo” – The track I pretty much made with the bonus tracks / B-Sides album in mind. This and “Bandwidth” were the last two pieces I wrote while creating the album. I love it but I wanted to add some cool stutter effects to fill it out some, and I couldn’t quite get it right, so I figured this would be almost like the center piece of the bonus album. It’s also the first track I put up for everyone to hear after releasing the album, so it’s almost like a “single” in a way.

3) “Forgotten World” – A very cool track that just felt too long. In the end, I decided not to cut it down at all because I really like how all the sections work together. I’m glad I held it off the main album, because it would have made the tracklist drag a little, but I’m glad people get to hear it now. And it just so happens that a bunch of people have told me it’s their favorite track on this release.

4) “Am I?” – I always considered “Echoes,” “The Necessary Steps,” and “Am I?” to be a sort-of three part trilogy. They fit really well together, but including all three on Echoes In The Dark would have been somewhat redundant. In the end, I decided to to pull “Am I?” and I’m glad I did because I ended up adding some extra layers of piano towards the end that, while very simple, add so much to the song.

5) “Moving Backwards” – This is the track that I had the hardest time cutting from Echoes In The Dark. Right up until the last minute, it was a 13 song album, but I just decided that a) I wanted a 12 song album for my debut full length (OCD? maybe…), and b) the track just wasn’t perfect. I ended up playing with “Moving Backwards” and changing things over and over until I was finally happy with it. I really love this song even though it’s overall a pretty simple piece of music.

6) “On The Outside” – A really cool track that I just couldn’t get the mixing down right on. It was a real tough one to get perfect, but I think I finally got it. It would have been great on Echoes In The Dark but again, 12 songs was my goal, so it probably would have gotten cut even if I had finished it in time.

7) “The New World” – This was one of the first tracks that I made and decided “I think I’m ready to make a full album.” I was so proud of it when it was finished. I must have listened to it a hundred times in a row. I left it off for two reasons… a) I consider it to be a little too similar to “Takeover” and I didn’t want to include both, and b) this is another of those tracks that had been heard a ton of times on my website and I wanted to keep the balance of previously unheard music above tracks that people had heard.

8) “Where Shadows Go” – A really cool track that I actually almost left off this compilation. I was worried first of all that the tone is too far off from everything else. I also had trouble properly working the transition to and from the slow part. But in the long run, I got it right, and I felt like it’s too cool of a track to hold back on.

In the next blog post I will go over the four remixes and the people who did the remixes.