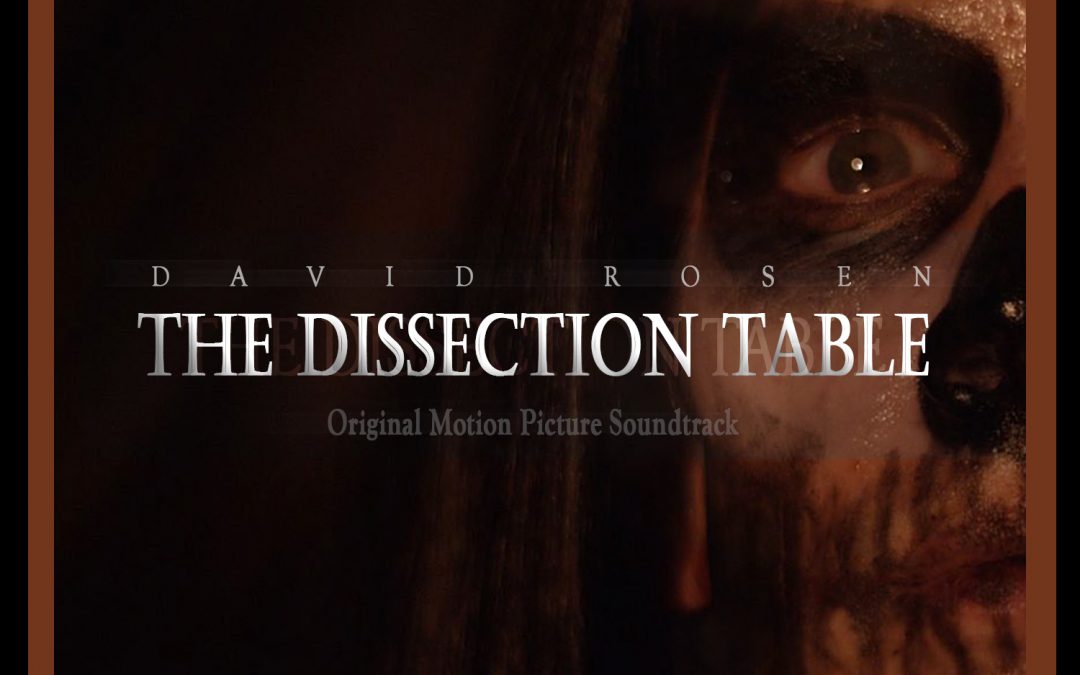 UPDATE: I have posted a special sneak peak at the whole album, The Dissection Table (Original Motion Picture Soundtrack) over on my podcast, Piecing It Together as a bonus episode. If you’d like to give the whole album a listen right now, for free, check it out at https://www.piecingpod.com/2021/10/08/the-dissection-table-album-preview-special-episode/

I have waited a long, long time to write this blog post… I am finally releasing the score to a horror feature I scored a long time ago called The Dissection Table as its own soundtrack release on October 15th, 2021! It is available to pre-order TODAY!

So what do I mean when I say I’ve been waiting a “long, long time” to write this blog post? Well over on the album’s landing page you can read the whole story of the album and the film (and please, do click the link and take a moment to read the full story), but to make a long story short… The Dissection Table is an independent film I scored in 2015 directed by Douglas Binford and written by and starring Max Gideon and Victoria Viveros (who both starred in my “If Only Tonight I Could Sleep” music video). I’ve always loved this score and thought it was some of my best work, and the idea of releasing it as a soundtrack was an immediate thought I had as soon as I finished it. The only problem was, the film itself had to be put on the back burner and was never finished.

As is the case with a lot of truly independent films (not like A24 / NEON “indie” if you catch my drift), collaborators become unavailable, resources and money becomes scarce, and sometimes, things just don’t get finished. It’s just part of the game at this level. So I shelved the idea of releasing the soundtrack until the film would one day be finished and available. But I was recently going through my computer looking for interesting things to possibly put on the Produced by David Rosen Patreon (which you SHOULD sign up for, and WILL get a bunch of bonus tracks from the rest of The Dissection Table score), I came across a huge surprise… I already like 90% completed work on turning the score into a soundtrack album at some point! I totally forgot about it. I actually even had a note file with it with a listed release date planned for June of 2016! It was like my past self just put this thing in a time capsule and I just happened to open it up, pretty much ready to go!

Like I said, definitely click over to the album page and read the full story for more details about the making of the film and score and album, but I’m so excited to finally release this album for you all to hear. It fits in perfectly in the head space I was in back in 2014-2016, making my darkest and most electronic music, and I’m so proud of this stuff. It’s got a lot of that Trent Reznor & Atticus Ross sound… But also feels like some heavily electronic scores like Ex-Machina or Annihilation or It Follows. I love making music like this and I can’t wait for you all to hear it.

The album is available for pre-order NOW on iTunes and Bandcamp. If you happen to be reading this on October 1st, it also happens to be #BandcampFriday so you can pre-order it today and they won’t take a cut of the sale. So if you want to support me and what I do, maybe go put in that pre-order now.

I’m obviously scheduling this release in the lead-up to Halloween, and most of these tracks will also fit perfectly on my “A Halloween Playlist” on Spotify… So expect me to be sharing that again soon (and maybe I’ll even have a few more things to add to it soon…)

I don’t know if I’ll create any music videos to go along with this album, and as I mention in the album page, we’re not sure when the film will finally see the light of day, but at least the music is here for you to finally listen to. October 15th. Two weeks away. Pre-order is available NOW on iTunes and Bandcamp!