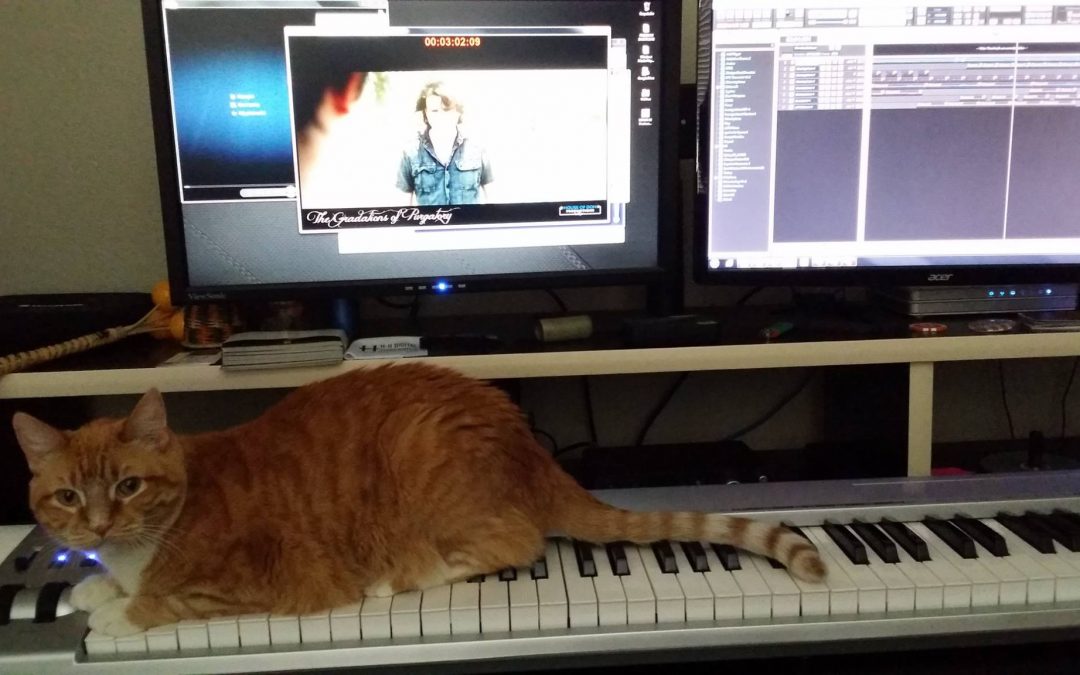 So one of the main themes of my career as a composer so far is “when it rains it pours.” I might go weeks between projects, but usually when I get one, I get a whole bunch… And last week I ended up having to score 3 short films in one week. It was a nice little challenge and I figured it would be fun to share the story and the results with you. Oh, and that’s my famous cat, Lily Bear up in the picture up there helping out with some of my work. I figured I’d extend her 15 minutes of fame a little further… Anyway, on to the story…

“The Gradations Of Purgatory”

First up is “The Gradations of Purgatory,” directed by Doug Farra of House of DON Productions, who also directed my upcoming “If Only Tonight I Could Sleep” Music Video. This was a film that was made to be submitted to the HBO Project Greenlight competition. It tells the story of a man being given choices that will seal his fate upon being reincarnated. It’s a very cool, unique film and I really love how my score turned out. I’ve got a bunch of great comments on it and you can watch it here:

Also for the Project Greenlight competition was “Pathos,” directed by Eduard Osipov for Cohencidence Productions. Eduard and most of the rest of the crew on this film were all Las Vegas-based people that I hadn’t worked with before, and it’s great to be able to keep finding new, talented people to collaborate with. This film is also about a man that has to make a choice, although it’s a different kind of story.  It came out great, and I really hope to be able to work with Eduard and his collaborators again in the future. You can watch “Pathos” here:

UPDATE: Due to Project Greenlight voting, the video has been temporarily been made private. When it’s made public again I will update the video link!

The third film I worked on was actually for a 48 Hour Film Project and I actually had a total of 6 hours to finish it from the moment I received the file to when I had to get the finished score over to Ben Yonker, the director. I had never directly worked with Ben before this, but he worked on a film I scored earlier this year called “The Hoarder” directed by David Michor. I like working fast, but this was probably the fastest I’ve ever had to finish a project and to be honest, I loved the experience and I think my score and the film came out great. It’s called “Dig” and it’s very, very dark  and probably best left unexplained. Just go watch it here:

http://vimeo.com/jumpcuts/dig (due to embedding restrictions you have to click the link on this one)

So what’s next? Well, sending out the rewards and stuff from the “If Only Tonight I Could Sleep” Film Festival Fundraiser, that’s probably number one. I’m also getting ready to announce the first public screening of “If Only Tonight I Could Sleep” which will be in September at the Reel Recovery Film Festival. I’ve also been working on a lot of new music that is almost definitely going to turn into my second album… And definitely be ready sooner rather than later. And aside from all of that, I’ve got a bunch more projects in the pipeline… Just gonna keep on taking on great project and making music. Thanks for reading!