Before we get started, make sure you click play on the piece of music up above. You listened? Good. Welcome to the first installment of what will be a new feature on my website for those of you that are interested in my process. This is THIS THING RULES, where I’ll be sharing my experience with a new piece of music software or hardware, creating a piece of music either exclusively with that new piece of software or with it featured heavily, and then writing a little about it. And the first entry in this series will be Fluffy Audio’s AURORA.

Fluffy Audio describes AURORA as a “cinematic & hybrid library” and says that they “initially thought [of it] as a perfect tool to make soundscapes and long sounds, [but] we soon realized the real potential of AURORA when working on the advanced Rhythm section.” This description couldn’t be more perfect. Right off the bat when creating a sound or digging into the included presets, this thing was clearly originally meant as a sort of soundscape generator. The sample track I created up above, however (you did listen to it right? if not go hit play… I’ll wait…), was made to be more song-like and fleshed out, and required a number of different instances of AURORA working together, using its sound generation controls as well as its polystep patterns. The truth of the matter, the phrase “jack of all trades, master of none” absolutely does NOT apply to AURORA because I was able to create a little bit of everything with this powerful piece of software, and it all sounds great.

I started off by layering some of its pads and soundscapes to create the underlying bed of sound (sound-bed? same difference…) and then started adding some rhythm patterns. Within minutes I already had something that could work on its own for a film or game score, but of course, for the purposes of my site, I wanted to make something fuller that builds up.  When I first got in touch with Fluffy Audio, I specifically asked if it was “playable” and what I mean by that is whether or not it has sounds that I can move around with and actually play melodies with, rather than just using the included tools like the arpeggiator, delay effects and preset rhythm patterns… They assured me I could and of course, they’re absolutely right. 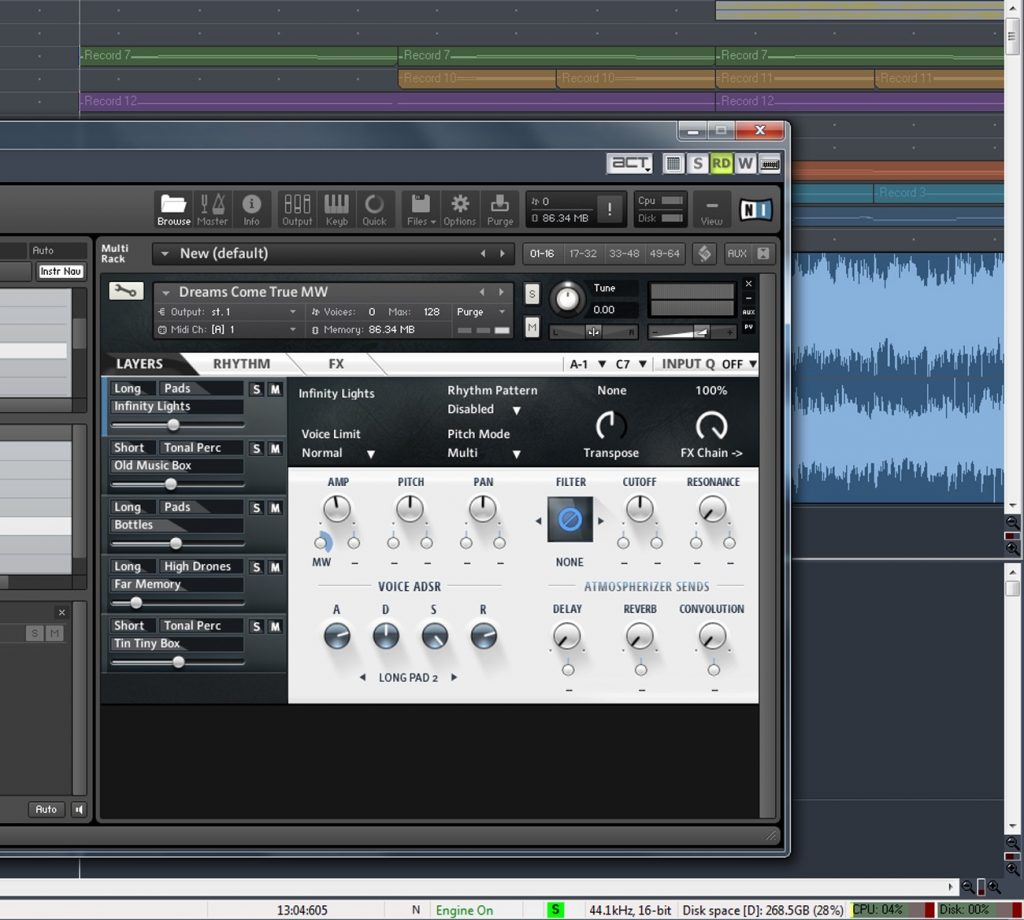 While I’d like to see more piano and keyboard style presets to get me started (the more playable sounds are mainly bells, pads, and classic synths like saw and sine waves), what it comes with sounds great and are a breeze to tweak and play with. I started adding some keys, bells, and layers of synths and pads that started to bring the piece to life. Then I began adding some percussive elements which really made the whole thing pop. I then started going back in and messing with the built in effects like reverb, delay and distortion… again, this thing has tons of tools all built right in. Really the possibilities with this thing are endless and I didn’t even dig too deeply into all the settings I could potentially tweak.

But bringing this short review full circle, I really do believe the main reason for using AURORA is creating soundscapes. What would take multiple pieces of software (or at least multiple instances of one piece of software) from other companies, I can do with one instance of AURORA when it comes to a really cool, unique mood setting layers… And sometimes that’s all you really need for a scene. I can easily see creating  a backing track for some paranormal TV show or something in just a few clicks of the mouse and a single key or chord on the keyboard using the features of this amazing software. Spicing things up by adding a subtle (or not so subtle) layer of  rhythm using the included controls is just as quick and easy.

AURORA is available for $199 from Fluffy Audio (or if you act quickly, the introductory offer is still going on for the next couple days at $169). If you’re a musician, especially one who composes for film, I highly recommend it as it would be a great addition to any composer’s arsenal.

I hope you enjoyed my first edition of THIS THING RULES. I’m aiming to post one every other week, so if there’s something you want to see, just let me know and I’ll see what I can do.